If a picture is worth a thousand words, a video is worth a million. This post attempts to capture the hazards that exist with the buses on Nevada Avenue. These videos were taken around 9:00 am on a weekday. This is a calm time of day and a safe time to capture video, but these certainly illustrate potential safety hazards that are amplified during rush hour and have been reported to ONEN and MMT by concerned citizens. These might be acceptable hazards to MMT, but when there are safer options only one or two blocks to the east or two blocks to the west, they are not acceptable to the people who live, walk, bike, or drive on this beautiful but busy street.

This first video starts on Jackson Street turning right to go south on Nevada Avenue. Notice how the bus needs to cheat a few feet into the left turn lane at the light to prepare to turn right. Note that the hospital emergency entrance is 1/2 block behind the camera on Jackson Street. If the bus was continuing on to Weber Street or Wahsatch Avenue, the bus would be going straight and would be able to stay within its travel lane. The right turns onto Weber Street and Wahsatch Avenue are not at a light and are not busy intersections, nor are they on the same block as a hospital emergency entrance.

As the bus continues south through the historic district, the bus comes very close to crossing into the left lane every time it passes parked cars on the right. This is not too bad during this calm time of day, but it becomes very dangerous during rush hour. Even if this was a dedicated transit lane, this issue would still exist. Wahsatch Avenue has much fewer parked cars and has 29% (5,181 ADT) the traffic of Nevada Avenue (17,564 ADT), making it a much safer route for our public transit. 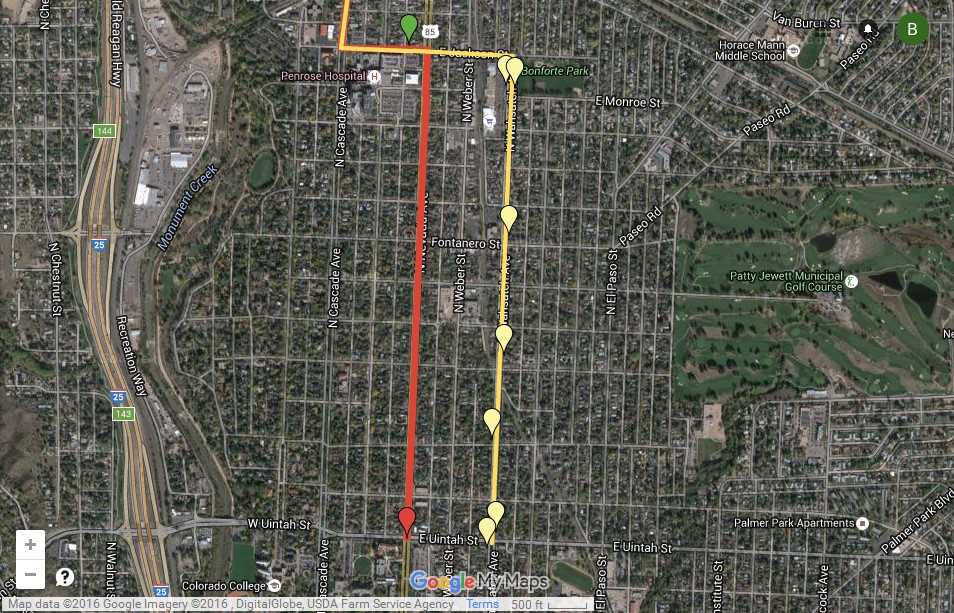 This next video is going northbound on Nevada Avenue approaching the hospital (2 blocks west of the Bon Shopping Center). Watch as the bus pulls over into the parking lane to drop off a passenger (likely to start his 3-block walk to Safeway) while sticking out a few feet into the travel lane. A passing car moves into the left lane to pass. If this was during a busy time of day, several cars would be swerving around this bus. We have more than one eyewitness of this phenomenon and someone reporting almost being hit as the car next to them swerved over and almost ran them into the median (See second email here). MMT commented that this is common and happens regularly on West Colorado Avenue and Manitou Avenue. This may be acceptable to MMT, but unlike those examples, there are safer options through the Old North End.

After the bus starts again, notice how it has to immediately move into the left lane to prepare to turn left on Jackson Street towards the hospital emergency entrance. This must be a difficult maneuver during rush hour. If this bus traveled up Weber Street or Wahsatch Avenue, it would be able to drive straight through the light at this busy intersection. 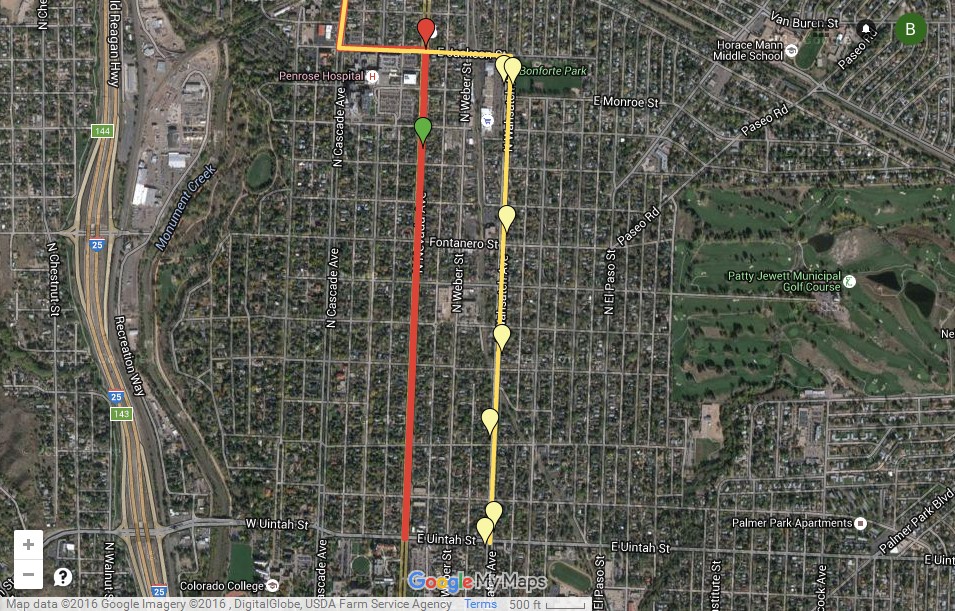 UPDATE: Here is a new video shot on June 14, 8:00 am at southbound Nevada at Columbia street. Notice how the bus blocks the right lane of traffic.

UPDATE: The following pictures were shot on June 13, 4:30 pm. This accident was caused on southbound Nevada during the evening rush hour when the blue car was trying to pass the bus and get into the right lane to turn right on Uintah. Right lane traffic suddenly stopped and he got caught between the bus and the stopped silver SUV. The bus was not able to stop in time before hitting the car. Although the bus obviously was not at fault, this demonstrates how the presence of buses on our busiest residential street simply is not good policy. 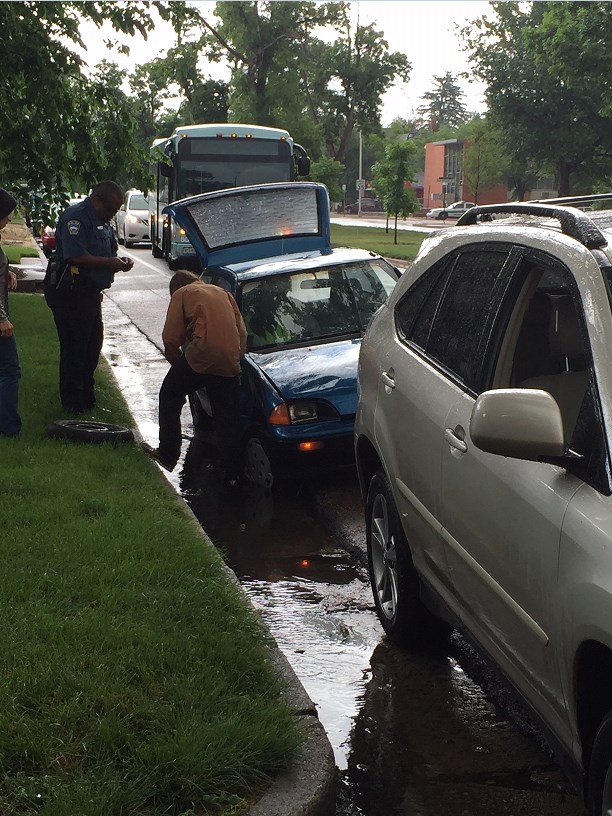 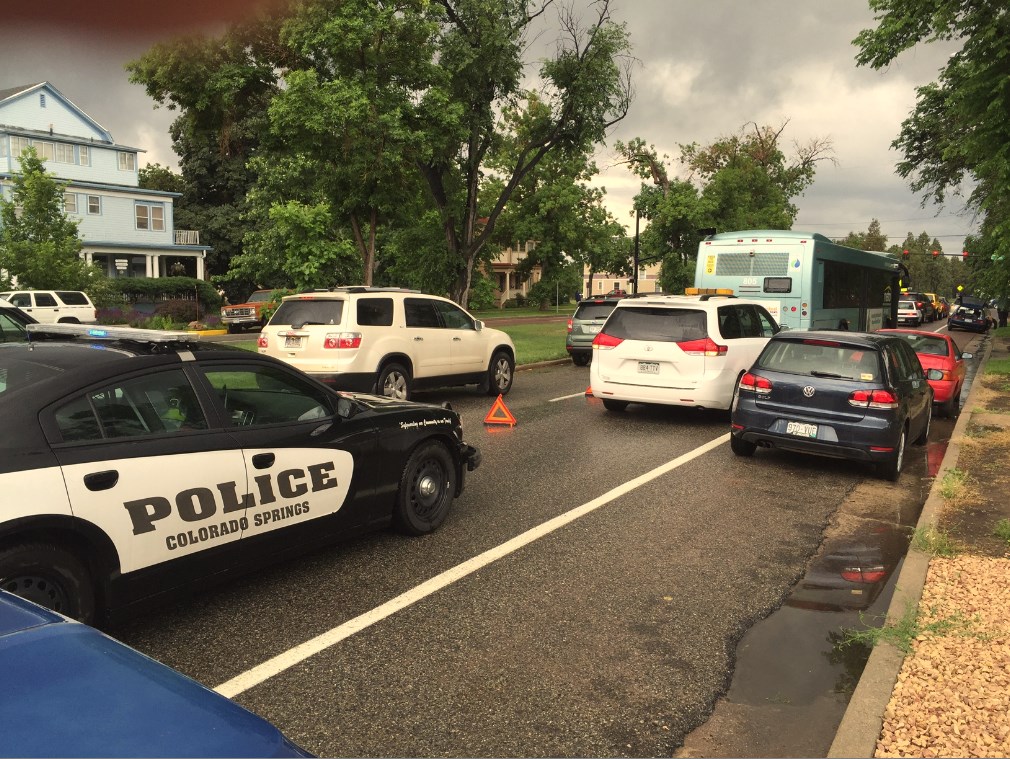 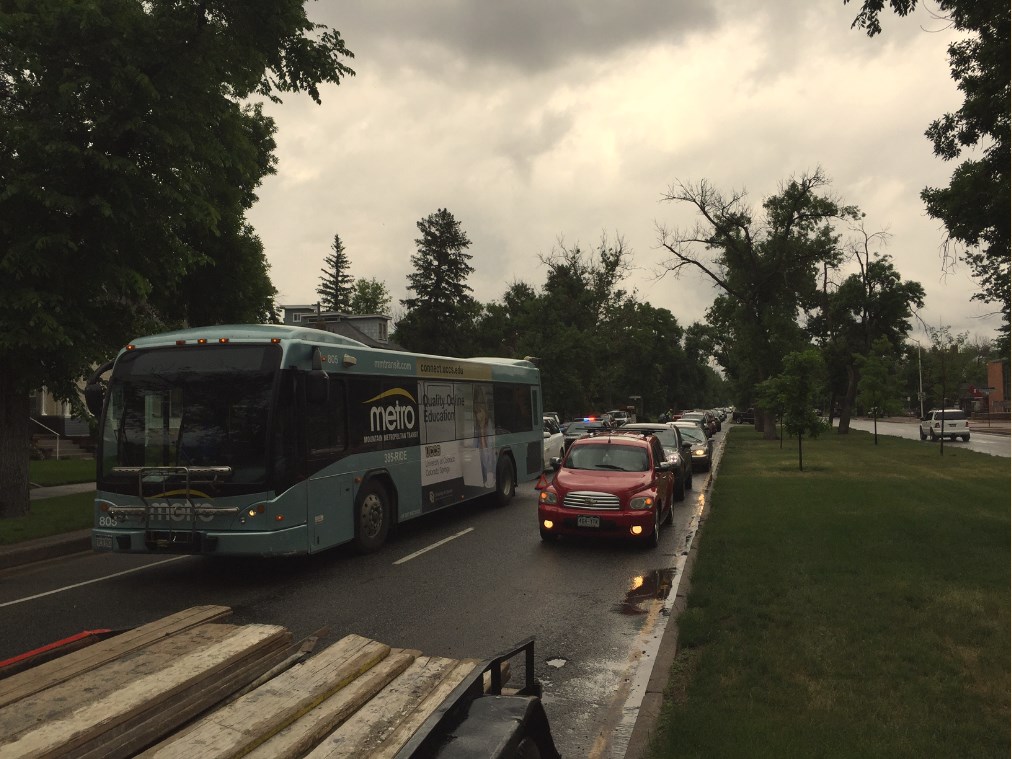 This last video shows the drive on northbound Wahsatch Avenue from Uintah Street, left onto Jackson Street up to the light at Nevada Avenue. In other words, this is the route that the ONEN Transit Committee felt would best serve the ONEN and Patty Jewett neighborhoods. Notice there is less traffic (except for one speeder that runs a red light! safety-sizing please!) and with few parked cars it feels much roomier. Notice the currently unused bus shelters in front of the Bon Shopping Center and the additional walk patrons of Safeway and the shops at Bon must now do to get to the bus stops on Nevada Avenue. The increased traffic on Nevada Avenue at the end of the video is very noticeable. It is easy to see how the wise authors of the ONEN Master Plan identified that there are several minor arterial streets through our neighborhood and wanted to, “Maintain an equitable distribution of traffic flow among existing arterial streets in the neighborhood, so that no one street is excessively overloaded with non-local traffic.” 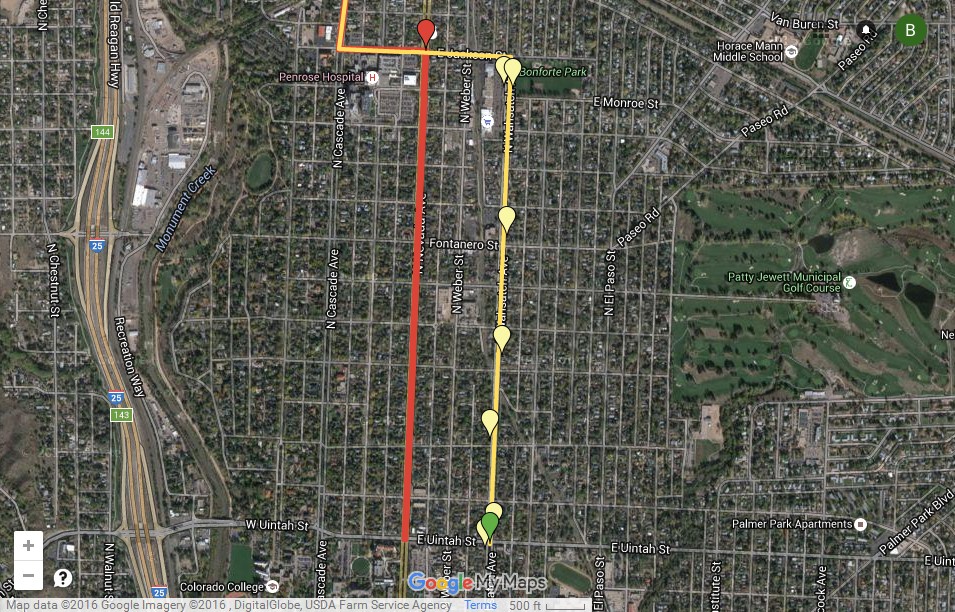 Online poll is open on Nextdoor.com for ONEN and Patty Jewett neighbors. If you haven’t joined this online community, now is a good time to do so and cast your vote. 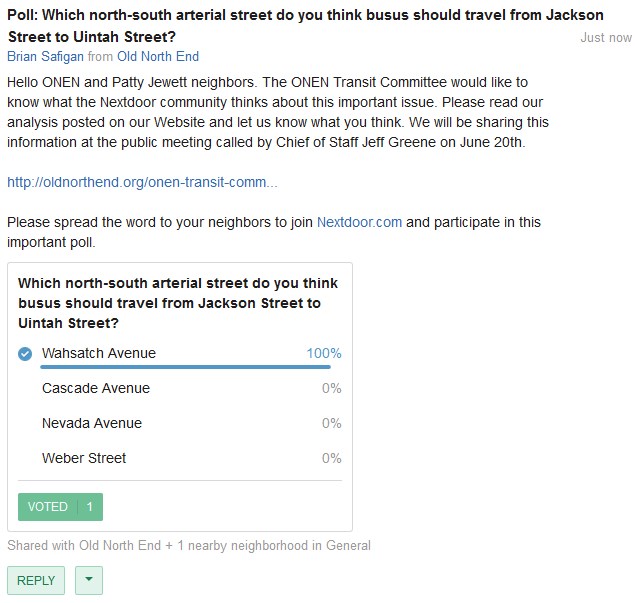