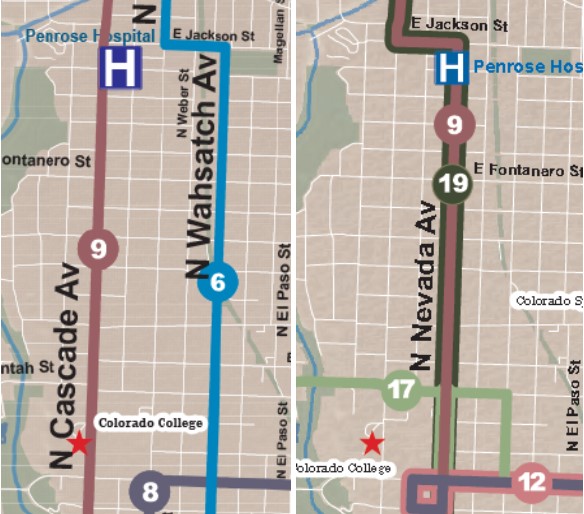 On January 4, 2016 MMT announced public meetings on their Facebook Page concerning proposed route changes to take affect on May 1, 2016: 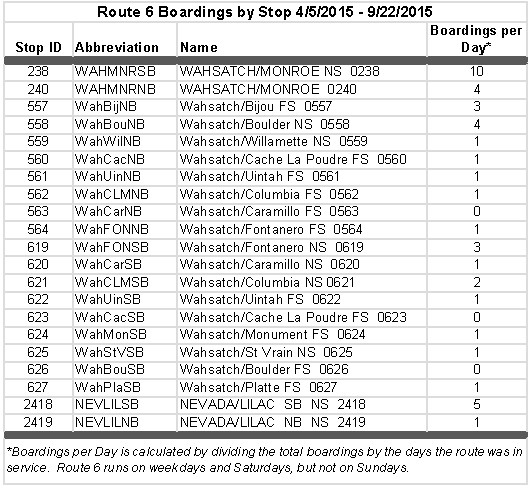 Because of increased frequency proposed for Route 9, Route 6 will be restructured accordingly, and the segments on Nevada and Wahsatch Avenues, south of Fillmore Street, are proposed for elimination. These segments (identified in red, below) parallel the 15-minute service on Route 9 and are duplicative. Ridership at the bus stops proposed for elimination (see table) can access Route 9 two blocks to the west along Nevada Avenue. Connection can be made to Route 9 at Fillmore Street. See the map below: New service will also be added to the Lelaray Street loop to provide access to several medical service facilities in the area. 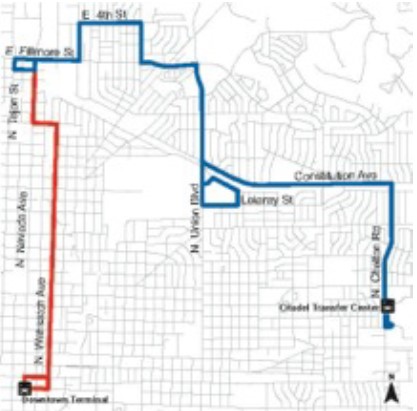 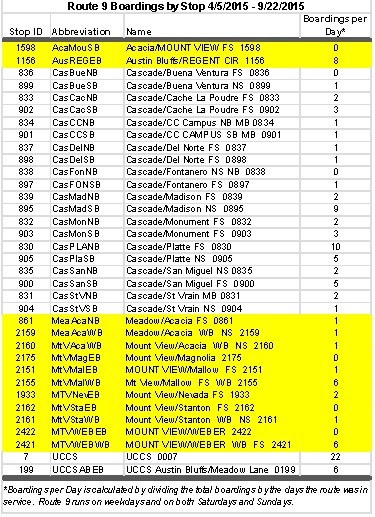 MMT’s movement toward increasing frequency will take a bigger step with proposed 15-minute service on Route 9. Additional revisions to this route also include: 1) The elimination of service on Mount View Lane, through the Cragmore neighborhood; 2) The movement of the route from Cascade Avenue to Nevada Avenue between the Downtown Transit Terminal and Jackson Street; and 3) Termination of the route at a new transfer hub on UCCS property off of Eagle Rock Road, north of Austin Bluffs Parkway. See map below for details: 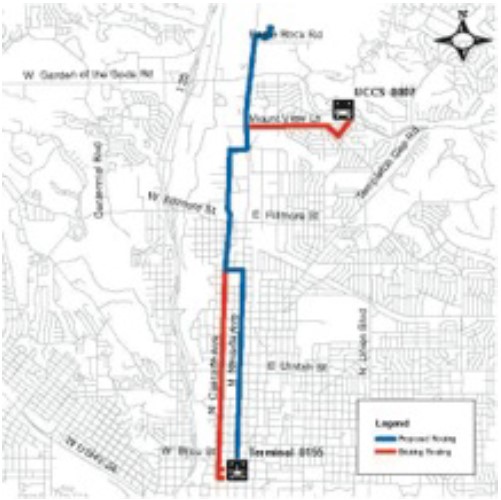 The highlighted bus stops in the table to the right show averaged boardings per day in the Cragmore neighborhood. Route 9 is operating significant miles and time through this unproductive area – resulting in a higher cost for very little benefit, and also impacting on-time performance. Ridership on Route 9 to the campus (at Centennial Hall) is also not significant, and does not warrant continuing to serve the main campus when the alternative is to provide high-frequency service to the transfer hub off of Eagle Rock Road. Saturday and Sunday Route 9 ridership to the campus is also very poor. Currently, Route 9 terminates in front of Centennial Hall, so this location is primarily used as a transfer location. Route 9 has also suffered from poor on-time performance and we have been notified again recently that there are conflicts between our vehicles and the numerous UCCS shuttles and personal vehicles in front of the Hall. Moving Route 9 to the new transfer hub off of Eagle Rock Road will improve on-time performance and productivity; reduce conflicts with UCCS shuttles at the Centennial Hall location; remove our vehicles from congestion at the main campus area, thereby reducing conflicts with personal vehicles seeking parking; and provide an operationally-efficient, safe, and convenient transfer location that allows our vehicles fast and efficient access and egress to the growth area of the campus (northeast corner of Nevada Ave, and Austin Bluffs Pkwy.). Also, since the new transfer hub is in close proximity to the University Village retail center, this proposal has the potential to generate significant ridership increases. This is an operating environment that transit agencies strongly desire; a high-frequency transit corridor with healthy ridership potential throughout the entire length, and anchored on both ends by two significant ridership generators (i.e. Downtown and University Village). High frequency routes and corridors like Nevada Avenue (and Boulder/Platte, which is served by Route 5) are better served by direct routing, rather than a circuitous routing through low-ridership neighborhoods, and particularly, the heavily congested routing in front of Centennial Hall.