A committee is currently being formed by the Old North End Neighborhood, the Colorado state-chartered volunteer homeowners’ association for the Old North End, to study the bus problem and seek more equitable treatment of Nevada Avenue residents by the city-contracted bus company (Mountain Metropolitan Transit). To facilitate the work of this committee, here is a brief three-page study of the history of public transit in the Old North End. 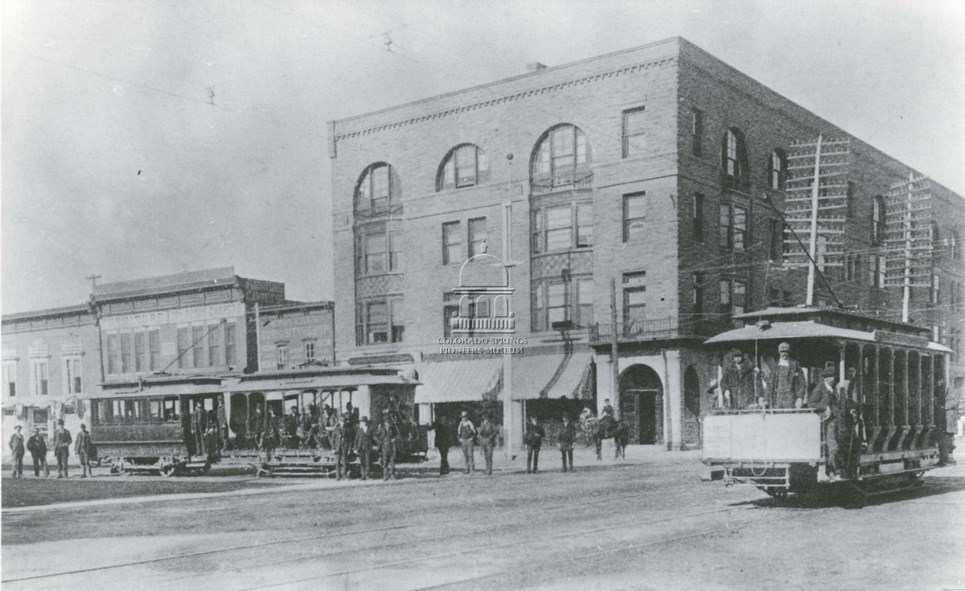 Electric street cars came to Colorado Springs toward the end of the 19th Century.  One street car company operated on North Tejon Street and proposed building its tracks right through the middle of Colorado College.  President William Frederick Slocum at the College was appalled at the prospect of trolley cars clanging their way through the very center of the campus.  President Slocum prevailed on General William J. Palmer, the founder of Colorado Springs, to join him in opposing the plan of the street car company to bisect the Colorado College campus with trolley tracks and noisy trolley cars.

The City Council of Colorado Springs sided with President Slocum and General Palmer.  The trolley company was forced to route its trolley cars around the Colorado College campus.  The trolley went east to Nevada Avenue on Cache La Poudre Street, then turned North on Nevada Avenue to Uintah Street.  Next the trolley turned west on Uintah Street before resuming its northward trip up Tejon Street, running northward through the Old North End.

To make certain that Tejon Street and its trolley cars could never, ever run through the College campus, the College proceeded to construct Palmer Hall, a major classroom and laboratory building.  The new building was located right at the spot where Tejon Street would come through the campus.  There was speculation, never substantiated, that General Palmer made an anonymous contribution of $100,000 for the construction of Palmer Hall so that Tejon Street would be permanently blocked.

The street car line added to the ambiance of the Old North End in the early years of the 20th Century.  Because the Old North End runs predominantly on a north-south axis rather than an east-west axis, most of the homes were within easy walking distance of the Tejon Street trolley cars.  Residents who were employed downtown could ride the trolley to and from work.  The trolley could also be used for shopping trips downtown and for high school students to ride to Colorado Springs High School, which was located downtown at East Platte and North Nevada avenues.  On weekends and holidays, it was very pleasant to ride the trolley on an excursion to the picnic grounds and hiking trails in Cheyenne Canyon on the southwest side of Colorado Springs.

The Great Depression of the early 1930s put an end to streetcar service in Colorado Springs.  The trolleys were replaced by buses.  The North Tejon Street bus faithfully followed the route of the old trolley cars, bypassing Colorado College by jogging over to Nevada Avenue.  In the early 1970s, after the City of Colorado Springs took over the bus service, the buses were removed from Tejon Street and began running straight through to downtown on North Cascade Avenue.

When it was announced in 1932 that the streetcars in Colorado Springs would be replaced with buses, a group of male students at Colorado College decided that one of the trolley cars should be removed from the tracks and placed at the front door of Palmer Hall.  On the last day of streetcar service, April 30, 1932, the students hijacked the final car as it rolled down Tejon Street from San Miguel Street to Uintah Street, just inside the southern boundary of the Old North End.

The motorman and one passenger were removed from the streetcar, after which it was lifted by brute student strength from the rails.  The streetcar was then pushed, steel wheels rolling on asphalt street, across Uintah Street and down Tejon Street toward Palmer Hall.

But, sadly for the students, the prank ended at that point.  Someone called the Colorado Springs Police, and a bevy of police officers in speeding police cars headed for Tejon Street just to the north of the Colorado College campus.  The students were warned the police were coming, however, and the playful youngsters removed themselves from the scene before the police arrived.  All the police found was a lonely, derailed trolley car sitting in the middle of Tejon Street, about a block south of where the street car tracks turned east on to Uintah Street and went over toward Nevada Avenue.

Poor old Palmer Hall never got to have a trolley car displayed in front of it.